Follow your bliss before it’s too late, you only get one chance at life 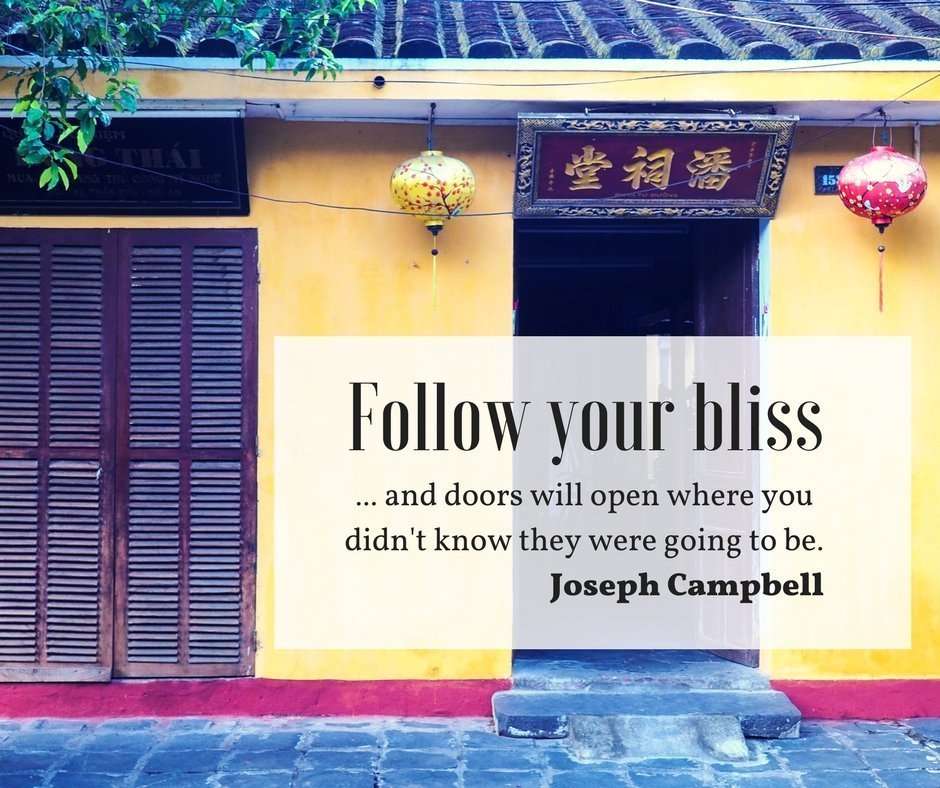 Follow your bliss before it is too late.  That’s one of the lessons I learned working as a  palliative carer in an old people’s home for a year. It was an unusual choice of job for an 18 year old high-school drop-out. But it was the first one that came my way. It gave me a regular wage and some of the most important life lessons that no high school could have ever taught me.

None of the dying in my care used Joseph Campbell’s oft-quoted words. But the message was always the same. Don’t risk arriving at death’s door with the regret of not having lived fully. The elderly I accompanied in death had experienced life in all shades of ugliness. Their lives had been defined by WWII, some had lived through two world wars.

They felt compelled to share with the ignorant, fresh-faced teenager what they had learned. Every day I got the same lecture: You are young, your whole life is ahead of you. Don’t waste it. Go for your passion. Don’t be afraid to explore your full potential. Many had regrets that life hadn’t turned out the way they had hoped. Fear had held them back from reaching for more.

“If you follow your bliss,” Joseph Campbell said, “you put yourself on a kind of track that has been there all the while, waiting for you, and the life that you ought to be living is the one you are living. Wherever you are — if you are following your bliss, you are enjoying that refreshment, that life within you, all the time.”

The lesson has stayed with me. Not that I’ve always followed my bliss or made the best decisions, but somehow I’ve managed to carve a life for myself that has allowed me to travel and see the world.

Many things sparked that initial desire to strap on a backpack and run away from home never to return again. Not least of which the urge to make lifestyle choices that were the complete opposite to those of my parents.

Take my father. He’s  lived a perfectly ordinary life, the way many men of his generation did. He stayed with the same company for more than 35 years. He commuted for 3 hours every day and  gave up most of his adult life for a secure income so that he could pay off a mortgage.

After he retired at 65, having barely paid off the mortgage,  he stayed on for another 7 years working from home as a consultant. It opened his eyes to what could have been. Suddenly he was making more money than he ever had in more than 35 years of employment with the same company.

But it wasn’t the money that kept  him working until 72. It was the fear of the brain slowing down. Having to stay up-to-date with the latest software kept him sharp. It also gave him a sense of freedom he had never known before.

He was finally able to take his family on the holidays he’d never allowed himself before. He bought my mother a new car. He traveled by plane for the first time in his life. There were no more lengthy commutes. He was finally his own boss and in charge of his own time.

My father so easily could have. Twenty years earlier, a young colleague from Ghana had shown him what was possible. The young immigrant had the courage to quit his job and go out on his own. It was a huge gamble. But it paid off.  He gained his freedom and became his own boss. It didn’t take him long before his freelance income superseded his previous earnings.

It got my father thinking. A close friend offered to lend my father the money to get started. Everything had been in his favour. And you know what he did? Absolutely nothing. He watched the young man from Ghana flourish. He still talks about him. About the courage the young man had to follow his bliss.

Retirement finally freed my father.  He got a small taste of what could have been. But it came too late. It’s a regret he will carry to his grave.

Following your bliss, living your own life, without following the well trodden path, is always fraught with danger. It means stepping outside of your comfort zone, into what is uncertain and beyond your control. But as Campbell says “The adventure is its own reward.”

Bronnie Ware,  the author of the bestselling memoir , The top 5 regrets of the dying,  worked as a live-in palliative carer for many years and observed a pattern in the things her dying patients said they wished they’d done differently. Many said that they regretted not living lives that were true to themselves. Many regretted working too hard and missing their children grow up. Many said that they wished they had allowed themselves to be happier.

Bronnie Ware is an inspirational example of how following your bliss, at the risk of not making huge amounts of money, can lead to a fulfilling life. She chose to work as a live-in carer because it provided her with a rent-free living arrangement  and allowed a lot of free time to pursue her real passion, song writing.

All her life she stayed true to her own motto to “live true to your heart’s song.” Before working as a palliative carer, she lived on a tropical island for a year and travelled the world for some years.

Watching her TED talk, you’ll see an authentic woman, who speaks from the heart and who seems still dazzled and humbled by how that one blog post, where she outlines the top 5 regrets of the dying, changed her life when it went viral six months after she had posted it.

I waited until I was over 50 to truly follow my bliss and make writing my fulltime occupation. Yep, I am a late starter and I’ve got tons of regrets up my sleeve. Actually, I am holding them as tension in my hips. The hips is where we store all the unresolved crap. But thankfully there are plenty of hip-opening yoga asanas and I do them with happy abandon.

I give full credit to yoga and the life lessons imparted by the dying in my care at the hospice for the bliss I am living right now in Vietnam as a senior digital nomad.

What about you? Do you feel like you are holding back from living an authentic life?

But it’s so easy to show up at death’s door with an armful of regrets.

What’s holding you back? What is your bliss? How have you changed your life to follow it?

I would love to hear from you. Please share your thoughts in the comments below, or if you prefer, send me an email (kerstin@writeyourjourney.com).

Join me in Bali and Unlock Your Creativity with Writing, Yoga & Mindfulness

Want to join the discussion?
Feel free to contribute!

Why we need to share our stories of resilience

Declutter, it’s life changing. But what about the bookshelf?
Scroll to top
Send this to a friend